I could scarcely beleive it. Here I was exploring dirt foot-trails in a rainforest. The excitement was so enlivening that I just shrugged off that fact that leeches were attacking my ankles. There is a story as to how I got here...

First, I'm a serious aquarist who keeps freshwater tropical fish. For a decade and a half I've been reading about the native waters where my fish live. I've read first-hand accounts from adventurists who traveled to various rainforests with the intent of examining the contents of the streams, searching for new species, and collecting specimens to bring back to the States. Like a young boy who reads adventure stories, I slowly built up the urge explore a rainforest myself.

While reading planted in me the urge to explore a rainforest, the drive that led me to seek out this authentic rainforest was born in Bermuda. Yes, Bermuda -- almost exactly on the other end of the world from Australia. 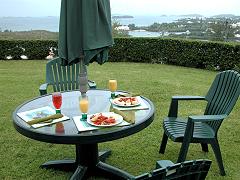 Two years earlier I was the guest speaker at the "Bermuda Fry Angle Society" -- the island's aquarium society. I stayed for several days -- not at a hotel or on a boat, but with people who lived there. My hosts told me stories about living on the island and took me to places that tourists do not experience. At the end of my stay I bumped into some tourists who were literally "just off the boat." I realized that even though these travelers were in Bermuda, but they were not authentically experiencing Bermuda. They didn't understand the history, the economy, the lifestyles, or much anything authentic to the people. I knew what they were missing because I had been experiencing it.

I came home with an appreciation for "authentically" experiencing a place.  The tourist routine doesn't seem to touch this level of authenticity.  I tasted something "more" about travel, and now I expect to taste it wherever I can.

So my wife and I ended up in Australia in April 2005 -- we were celebrating our 25th anniversary. Our time was split between Cairns and Sydney. 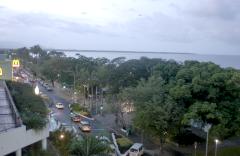 Now Cairns is known as the access to the Great Barrier Reef. I'm sure the reef is spectacular. But I'm a freshwater aquarist. For various reasons, salt water just doesn't push my button. To the uninitiated, marine and freshwater are both about fish and aquariums. But the rules about keeping each kind of aquariums are drastically different.

Cairns is near the Australian rainforest.  Being a freshwater guy... Why see the reef when I could go to the rainforest !?! 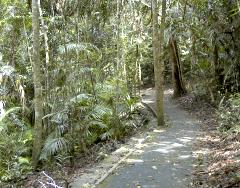 On the first day we took a tour that included a train ride up a mountain to a 'tourist' rainforest. It turned out that the destination was a small town filled with at least a hundred souvenir shops. People spent hours there to buy trinkets!

But there also was a walking path that wound through the neighboring rainforest. This, too, was fairly touristy. The path was paved in asphalt. While the rainforest growth was real, it was relatively thin and bordered by human society. These were the trees and the plants of the rainforest, but it seemed rather domesticated.   It just wasn't authentic rainforest.

The next day my wife and I moved on. We made arrangements for a driver to take us an hour-and-a-half out of the city and up to the rainforest. The final few miles were a dirt path, and it let us to a cabin on stilts. Our new home for two days overlooked miles of national rainforest.   This is authentic stuff!

And so I explored!

the treehouse on stilts 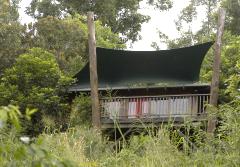 For two days this "tree house" was our home. 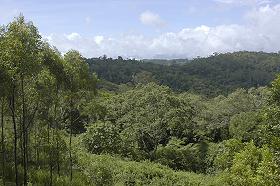 I spent several hours on the deck, taking in the miles and miles of rainforest that opened before me.

walks in the forest 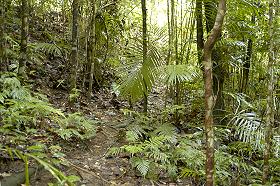 No asphalt walk ways here. I hiked several miles through the rainforest over dirt trails. Sometimes the trail was hard to see, and I had to be careful or I might get lost. 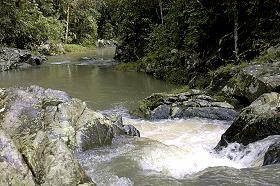 I stumbled upon two streams. Each time I broke from the trail and followed the stream for quite a ways. Sometimes I had to climb up and down the banks. When by the water I had to fend off leaches.

All this work was worth it.  Freshwater streams with a rainforest backdrop -- these were photos I had to get. 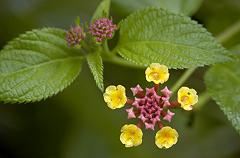 I quickly learned that while I take in the whole rainforest setting, I also needed to keep an eye out for the smaller things. Flowers and insects contribute to the rainforest story. These were not the flowers or butterflies that I normally see. 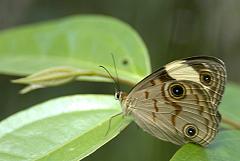 This page introduces you to my Australian trip. It's photos provide a very brief sample of the hundreds I brought home. The brunt of this project is sharing some of my best photos in two photo galleries.   Please read on.

gallery of my rainforest photos

I spent hours exploring the three trails that led from my tree house and into the rainforest. I display some of my favorite photos in my Australian rainforest gallery.

please be patient as I build the gallery section

gallery of my Sydney photos

But wait! After I left the rainforest, I flew to cosmopolitan Sydney. With camera in hand I found two favorite subjects to photograph.

the Opera House and the botanical gardens 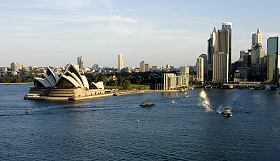 The Opera House can be photographed from various angles and distances. That was my approached. 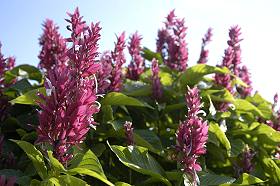 I could produce a whole CD on just the plants and flowers of the botanical gardens located behind the Opera House.

please be patient as I build the gallery section

wall photos of the rainforest and Australia

After the galleries are in place, you will be able to obtain wall prints from Randy's best photos of this rainforest expedition and of the Sydney photo shoot.
This site's e-newsletter will keep you informed.